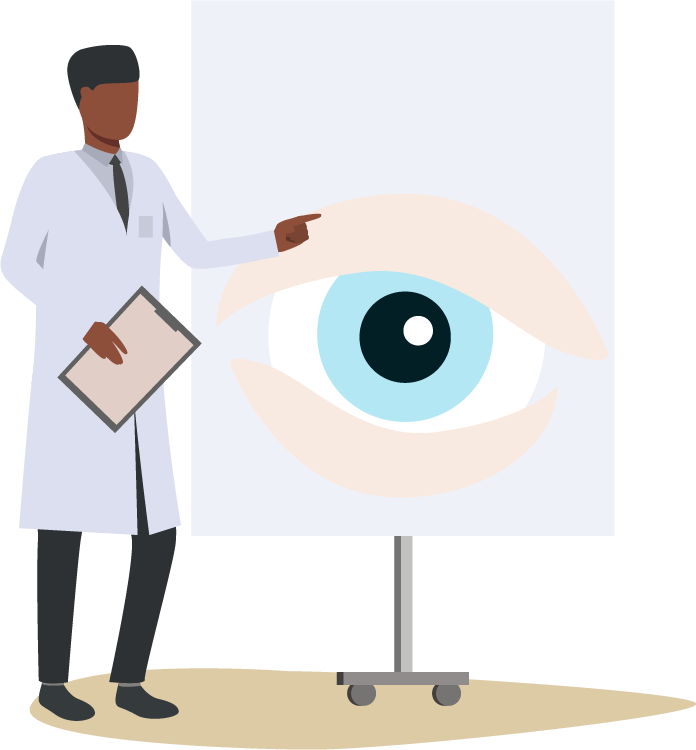 Retinal prosthesis is a real prosthesis implanted on the retina at the macular level and which replaces the function of degenerated photoreceptors. For its correct functioning, it is clearly necessary that the internal retinal layers and in particular the internal ganglion layer are intact, it is in fact the second neuron that will collect the information obtained through the prosthesis and transmit it to the optic nerve. The implant therefore allows electrical stimulation of the visual pathway, roughly similar to the one obtained naturally.

Currently the only authorized implantable prosthesis on the market is the ARGUS II, of which 300 have currently been implanted worldwide, 55 of thesewere implanted in Italy. The indications for the implantation of the ARGUS II prosthesis are represented exclusively by retinitis pigmentosa with visual acuity reduced to light perception or lower. The experimentation on dry AMD has unfortunately failed. All those patients who have a history of previous optic diseases or traumas affecting the eyeball that could obviously compromise transmission through the visual pathway are excluded from the implant.

The system consists of two parts: the actual prosthesis consisting of the epiretinal portion composed  of an electronic scaffold fixed on the retina with small nails connected to an episcleral portion that acts as an antenna allowing to receive the information deriving from the second part of the prosthesis consisting, in turn, of a camera fixed to a pair of glasses equipped with a small wi-fi antenna and an external battery fixed to a special video processor. The light signal is collected by the camera and sent to the processor which converts the image into an appropriate electrical signal and sends it back to the antenna attached to the glasses. The latter will send the signal to the antenna fixed at the episcleral level which will transmit it to the epiretinal prosthesis which will finally transmit the signal to the second sensory neuron. The glasses are equipped with filters allowing the patient to choose the brightness of the images, the zoom and the contrast.

The operation, although extremely complex and long, such as to normally require the execution of a general anesthesia, however, has characteristics similar to the implantation of an Ahmed valve (fixation of the prosthesis at the scleral level generally between the upper and lateral rectus muscles often covered with patches of various types and the intrabulbar implant of part of the prosthesis). Some of the differences with the implantation of the Ahmed valve are the necessity to perform a vitrectomy via pars plana and the localization of the intrabulbar portion which is, as we have already said, epiretinal.

After the implant, a long and tiring visual rehabilitation is required aimed at the interpretation of the new visual patterns.

At the end of the rehabilitation period, the prosthesis allows a gray scale vision with a relatively good field of view (about 12-20 degrees). The patient may therefore be able to locate doors and windows and in some cases recognize the faces of loved ones.

It is a new experimental approach that exploits a liquid suspension of photosensitive polymeric nanoparticles implanted in the subretinal area with a cannula needle inserted via pars plana that replace the degenerated photoreceptors. There are about 2500 of these nanoparticles for every cubic millimeter. This experimental approach is currently under study and there are still no patients treated with this technique.

It is another promising technique employed in the terminal forms of wet AMD. It consists in the sampling of autologous retinal tissue taken from the retinal periphery and transposed into the macular region. For the moment, 9 eyes have been treated with this approach, all of these eyes had reduced visual acuity to finger counts or lower. The results have been promising with an increase in visual acuity in about 50% of cases after treatment, but they still require more in-depth analysis on a greater number of subjects.

Vincenzo Petitti is Professor of Eye Diseases in the UniCamillus’ Degree Course of Physiotherapy. He also teaches Treatment of oculomotricity disorders in postural imbalance in the I level Online Master in Clinical posturology.

In particular, the Master aims to train highly qualified personnel in the prevention, diagnosis, evaluation and therapy of postural dysfunctions. This is an innovative training offer from the University which, through a platform available 24 hours a day, allows students to reconcile work, study and personal life.