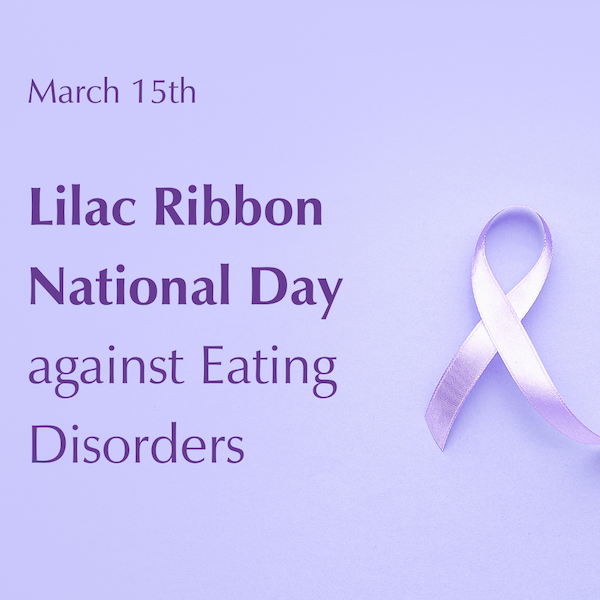 On March 15th, the color of the ribbon is lilac, and every year it reminds us the high impact that eating disorders can have.
Institutionally recognized in the Official Gazette, this anniversary has been considered official since 2018. On the other hand, awareness-raising process started few years earlier, in 2012, and got started from a father, Stefano Tavilla, who lost his 17-year-old daughter Giulia because of bulimia,  while she was waiting for her admission to a specialized facility. March 15th commemorates exactly the passing of Giulia.

For those who do not have to deal with these diseases, eating disorder are often limited to anorexia and bulimia. On the contrary, they can take many other forms, from binge eating to eating disorders not otherwise specified (EDNOS), up to to obesity. Raising awareness in society, and providing useful elements to understand red flags or the appearance of symptoms in those who suffer from eating disorders appears to be crucial.
The aims of this day are the defense of fundamental rights of those affected by eating disorders, the awareness raising in public opinion, the increase of consciousnesses about the social epidemic nature eating disorders are acquiring from both a national and international point of view, and the creation of a solidarity network for the ones affected by these disorders.

The Coronavirus emergency has further worsened the situation: the Italian Society for Eating Disorders Study estimates that over the last 19 months, new cases have increased by 40% and first visit requests have increased by 50%.
Currently, about 3 million young people suffer from these disorders. 96% are women, 4% men. Anorexia nervosa shows up in 36.2% of the cases, bulimia nervosa in 17.9% and binge eating disorder in 12.4%. Data also reveal a further lowering of the onset age: 30% of those suffering from these disorders are under the age of 14. Moreover, data show a greater spread in the male population (in the age range of 12 and 17, that is to say 10%).

Eating disorders are linked to severe psychological and emotional sufferings. A combination of mutually interacting factors can ease the onset of such a disorder. Eating disorders social impact is high and involves important consequences on the social functioning of people, including limitations to life quality, social, work and relational connections.

“Important steps forward have been made through amendments to the Budget Law” – affirms Caterina Bini, Undersecretary of State for Relations with Parliament and PD Senator – “but these step should  follow up. This is the only possible way to help those suffering from this kind of disorder and support the associations engaged on the topic daily”.
“Every day our compass is our guiding restlessness to ensure answers to those who suffer from eating disorders. Stopping and resting just after achieving some results would be a serious unforgivable mistake” – she adds.

“Given the relevance of this topic, training health professionals is key. Therefore, we decided to  introduce a specific class on practical aspects and on the nutritional approach in eating disorders during the second year of our Master’s Degree in Human Nutrition Sciences at UniCamillus” explains Stefania Moramarco, the didactic manager of the course.
“Due to the topicality of this subject, we think that in-depth studies in this specific area must be introduced in university education for future students in Human Nutrition”, she concludes.