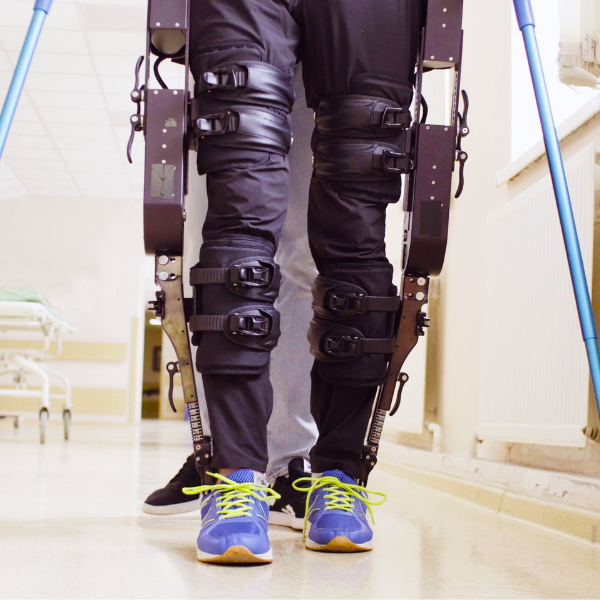 The new paediatric exoskeleton, Atlas, was presented on November 9 at the IRCCS San Raffaele, attended by the Minister of Health, Orazio Schillaci, who was accompanied by Professor Enrico Garaci, President of the Scientific Technical Committee of IRCCS San Raffaele, the President of the Lazio Region, Nicola Zingaretti, and the Councillor for Health of the Lazio Region, Alessio D’Amato. Atlas was presented by Daniele, a 5-year-old child with perinatal spinal cord ischemia: “He is my new superhero, together with Iron Man”.

“It is the only exoskeleton in the world that allows the child to move freely and whose uniqueness lies in the elastic technology that adapts to the body”, explained Marsi Bionics, the Spanish company that designed it.

Minister Schillaci greeted the innovation with these words: “Research is indispensable for better healthcare, IRCCS (Institutes of Hospitalization and Care with Scientific Character) are the place where research and innovation can be done at a high level. The exoskeleton, which you have presented today, is interesting and finds application in the smallest and most fragile patients, to whom our attention must go”.

“Neurorehabilitation”, explained Marco Franceschini, director of the Clinical Research Laboratory in Neuromotor Rehabilitation at the IRCCS in Rome, “is the tool that allows brain functions to be reorganised through the mechanism of synaptic plasticity. This mechanism takes on an even more important role in children with neurological diseases, many of whom have never had the opportunity to walk: the little ones, in this case, do not have to learn again but to learn from scratch. Enabling them to walk in a physiological manner with consistency and intensity is a therapeutic opportunity of fundamental importance”.

Atlas 2030, distributed in Italy by Emac Tecnologia Vitale, is the first wearable exoskeleton that can be used in paediatric age for the gait rehabilitation of children between 4 and 10 years of age with the following pathologies: infantile cerebral palsy, myelopathies (lesions of the spinal cord up to the C4 vertebra), muscular atrophy, muscular dystrophy, myopathies and various neuromuscular diseases. It is currently the only one in Italy.

“The robot uses active joints with variable stiffness, which mimic the processes of natural muscle function by biomimesis, ensuring the safe control of movement in children with neuromotor disorders”, explained Francesco Infarinato, head of the rehabilitation bioengineering laboratory. “Its uniqueness lies in the elastic technology, which adapts to the user’s body, is equipped with eight motors (two on the hip, one on the knee and one on the ankle on each leg) to ensure freedom of movement in all directions (the ‘overground’ system) and is used in association with a support system that guarantees the safety of the child, to whom it gives the possibility of walking in an active, repeatable and controlled manner, while allowing him or her to interact with the environment freely and safely. At the same time, this system allows the therapist to interact face-to-face instead of supporting the movement from the child’s shoulders”.

“The success of the exoskeleton in adults”, also emphasised Claudia Condoluci, head of the paediatric and developmental disabilities area at the IRCCS San Raffaele, “has led us to consider its use in paediatric rehabilitation as well. Most of the children, who are already using it in our centre, have never walked independently. With Atlas, they can do that and can also do different activities such as kicking a ball and drawing, things they would never have thought possible.

Therefore, the robot has a very important impact on the cognitive, emotional and social sphere for the child and family, besides learning and acquiring adequate motor control strategies, maintaining an adequate joint range, monitoring spasticity and strength, improving trunk stability and ventilatory and cardiovascular capacity. Considering this, and given the experience and outcomes of gait rehabilitation with exoskeletons in adults and the paucity of existing literature on paediatric intervention, we decided to propose a pharmaceutical-free, single-centre, randomised and controlled interventional pilot study”.

RoboKId, this is the name of the research project, will evaluate the feasibility, intervention and impact of such a rehabilitation approach on the quality of life and clinical functional status of the young participants, who will be 20 in total, through an intervention programme, which will integrate active robotic gait treatment and traditional therapy.

But why the name Atlas? In anatomy, the Atlas (C1) is the first cervical vertebra of the spine. Its name recalls the mythological Atlas (in ancient Greek), because it is the support of the head, comparable to a globe. In fact, Atlas, according to Greek mythology, was the titan who, not by his own will, but by that of Zeus, supported the sky with only the strength of his arms and therefore with an enormous and, above all, inhuman effort.